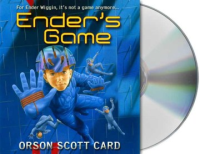 General Note
Compact discs
General Note
Distributor, publisher, distribution dates, or publication dates may vary.
General Note
Title from disc surface.
Participants/Performers
Read by Stefan Rudnicki, Harlan Ellison and cast.
Description
Once again, the Earth is under attack. An alien species is poised for a final assault. The survival of humanity depends on a military genius who can defeat the aliens. But who? Ender Wiggin is a brilliant, ruthless, cunning, a tactical and strategic master, and a child. Recruited for military training by the world government, Ender's childhood ends the moment he enters his new home: Battle chool. How will Ender perform in real combat conditions? After all, Battle School is just a game. Isn't it?