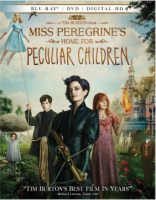 General Note
Originally released as a motion picture in 2016.
General Note
Based on the novel by Ransom Riggs.
General Note
Features: The Peculiar story, Map of days : Miss Peregrine's home/Blackpool tower, "Wish that you were here" music video by Florence + the Machine, gallery : sketches by Tim Burton and photographs, The Peculiars, Hollows and ex-Hollows.
Description
Following clues left by his grandfather, Jake discovers Miss Peregrine's Home for Peculiar Children and the dangers they face as he gets to know the residents, learns about their special powers, and finds that he alone has a power that will help him save his new friends.
Target Audience
MPAA rating: PG-13.
System Details
Blu-ray, DTS-HD Master Audio 7.1, widescreen 1.85:1.
System Details
This is a Blu-ray disc which can only be played on Blu-ray disc players and will not play on standard DVD players.
Terms Governing Use and Reproduction
For private home use only.
Language
In English, French, or Spanish with optional French or Spanish subtitles.
Language
Closed-captioned.
Language
Visually described for the blind and visually impaired.