Once upon a time in Hollywood.
(Blu Ray) 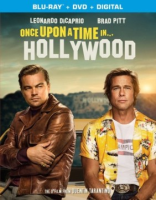