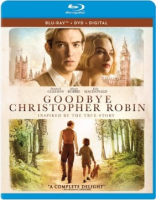 General Note
Special features: Commentary by Simon Curtis and Frank Cortrell-Boyce, a walk in the woods, healing a nation, A.A. Milne, hello Billy Moon, Daphne Milne, the story, Christopher Robin & his nanny Olive, the cast, gallery.
Participants/Performers
Domhnall Gleeson, Margot Robbie, Kelly MacDonald, Vicki Pepperdine, Alex Lawther, Stephen Campbell Moore, Richard McCabe, Geraldine Somerville.
Description
A rare glimpse into the relationship between beloved children's author A. A. Milne and his son Christopher Robin, whose toys inspired the magical world of Winnie the Pooh. Along with his mother Daphne, and his nanny Olive, Christopher Robin and his family are swept up in the international success of the books; the enchanting tales bringing hope and comfort to England after the First World War. But with the eyes of the world on Christopher Robin, what will the cost be to the family?
Target Audience
MPAA rating: PG; for thematic elements, some bullying, war images and brief language.
System Details
Blu-ray, region A, master audio 5.1, widescreen 1.85:1.
System Details
This is a Blu-ray disc made for Blu-ray disc players and will not play in standard DVD players.
Language
English, Spanish or French dialogue; Spanish or French subtitles; subtitled for the deaf and hard of hearing (SDH).