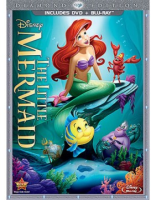 General Note
Originally released as a motion picture in 1989.
Participants/Performers
Voices: Rene Auberjonois, Christopher Daniel Barnes, Jodi Benson, Pat Carroll, Buddy Hackett, Samuel E. Wright.
Description
Venture under the sea where Ariel, a free-spirited mermaid princess, longs to be part of the human world. After bravely striking a bargain with Ursula, a sneaky sea witch, Ariel embarks on the adventure of a lifetime. With Flounder and Sebastian at her side, Ariel will need all of her courage and determination to make things right in both of her worlds. The Anniversary Edition invites all to sing along with the award-winning songs, and venture inside the studio for original recording sessions.
System Details
Blu-ray, widescreen (1.78:1) ; region 1, NTSC; Dolby Digital 5.1; Digitally Mastered ; requires Blu-ray player
Language
English, Spanish, French dialogue; Spanish and French subtitles; English (SDH) subtitled for the deaf and hard of hearing.