The mission song
(Book on CD) 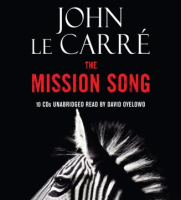 General Note
Compact discs
Participants/Performers
Read by David Oyelowo
Description
Bruno Salvador, known to friends and enemies alike as Salvo, is the ever-innocent 29-year-old orphaned love child of a Catholic Irish missionary and a Congolese woman. Salvo is inspired by his mentor, Brother Michael, to train as a professional interpreter in the minority African languages of which, almost from birth, he has been an obsessive collector. Soon a rising star in his profession, he is inevitably courted by the mushrooming overworld of British Intelligence. He is also courted -- and won -- by Penelope, a white upper-class star reporter on one of the great national newspapers, whom with typical impulsiveness he promptly marries. Dispatched by British Intelligence to a no-name island in the North Sea to attend a top-secret meeting between Western financiers and East Congolese warlords, Salvo is obliged to interpret matters never intended for his reawoken African conscience.
Differentiable Local note
BA/br