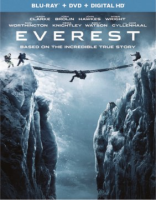 Creation/Production Credits
Director, Baltasar Kormakur.
Participants/Performers
Jason Clarke, Ang Phula Sherpa, Thomas M. Wright, Martin Henderson, Tom Goodman-Hill, Charlotte Boving, Pemba Sherpa, Amy Shindler, John Hawkes.
Description
Inspired by the incredible events surrounding an attempt to reach the summit of the world's highest mountain, the film documents the awe-inspiring journey of two different expeditions challenged beyond their limits by one of the fiercest snowstorms ever encountered by mankind. Their mettle tested by the harshest elements found on the planet, the climbers will face nearly impossible obstacles as a lifelong obsession becomes a breathtaking struggle for survival.
Description
"Everest is visually splendid, though it loses a few points for its murkiness in rendering its main characters as distinct individuals."--Village Voice
Description
"No one pays IMAX ticket prices for nuanced human drama, and the film's dizzying climbing scenes and vertiginous don't-look-down moments are what give it its heart-quickening power."--Entertainment Weekly
Description
"With its perilous central premise and gallery of individuals some of whom are destined not to make it, you could say Everest is a disaster movie in the old Hollywood sense of the term, but it doesn't feel like one. And that's a good thing."--Hollywood Reporter
Target Audience
Rating: PG-13; for intense peril and disturbing images.
System Details
Blu-ray, widescreen, described video; requires Blu-ray player.
Language
English, Spanish or French dialogue; Spanish or French subtitles; subtitled for the deaf and hard of hearing.