The brave a novel
(Book on CD) 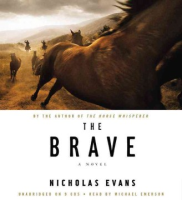 General Note
Compact discs.
General Note
Subtitle from container.
Participants/Performers
Read by Michael Emerson.
Description
Years after his rising career was ruined in a violent incident, former western movie star Tom Bedford now lives alone in rural Montana. He rarely sees his son Danny, who is currently deployed in Iraq. But when Danny is charged with murder in the aftermath of a ground skirmish gone wrong, Tom does everything he can to help his son, while simultaneously confronting his own dark past.
Differentiable Local note
OD/aj