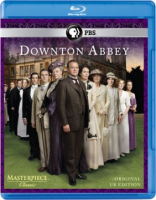 General Note
Created by Julian Fellowes.
General Note
Originally broadcast as an episode of Masterpiece Classic on PBS in 2010.
General Note
Release date: May. 5, 2011.
General Note
Bonus features: "Downton Abbey: the making of"; "Downton Abbey: a house in history."
Participants/Performers
Hugh Bonneville, Brendan Coyle, Elizabeth McGovern, Maggie Smith, Jim Carter, Joanne Froggatt.
Description
All seven episodes from the first series of the Edwardian costume drama following the lives and loves of those above and below stairs in a stately home prior to the outbreak of WWI. The Grantham family, long time custodians of Downton Abbey, face a crisis when the heir to the estate dies on the 'Titanic'. With his three daughters unable to inherit by law, Robert Crawley (Hugh Bonneville), the current Earl of Grantham, must try and marry his eldest daughter off in order to obtain an heir. Meanwhile, the family's determination to cling to class and rank is mirrored in a number of growing rivalries between the servants which threaten to undermine the smooth running of the house. A stunning and colorful drama set around the aristocratic Crawley family and the staff which serves them. Set between 1912 and 1914, Downton Abbey chronicles the conflict of class, gender, and politics, and serves it up with a refreshing dollop of sizzle and scandal.
Target Audience
Rating: Not rated.
System Details
Blu-ray; region A; 2.0 Stereo.; high definition 1080i, widescreen.
System Details
Requires Blu-ray player.
Language
Subtitled for the deaf and hard of hearing.